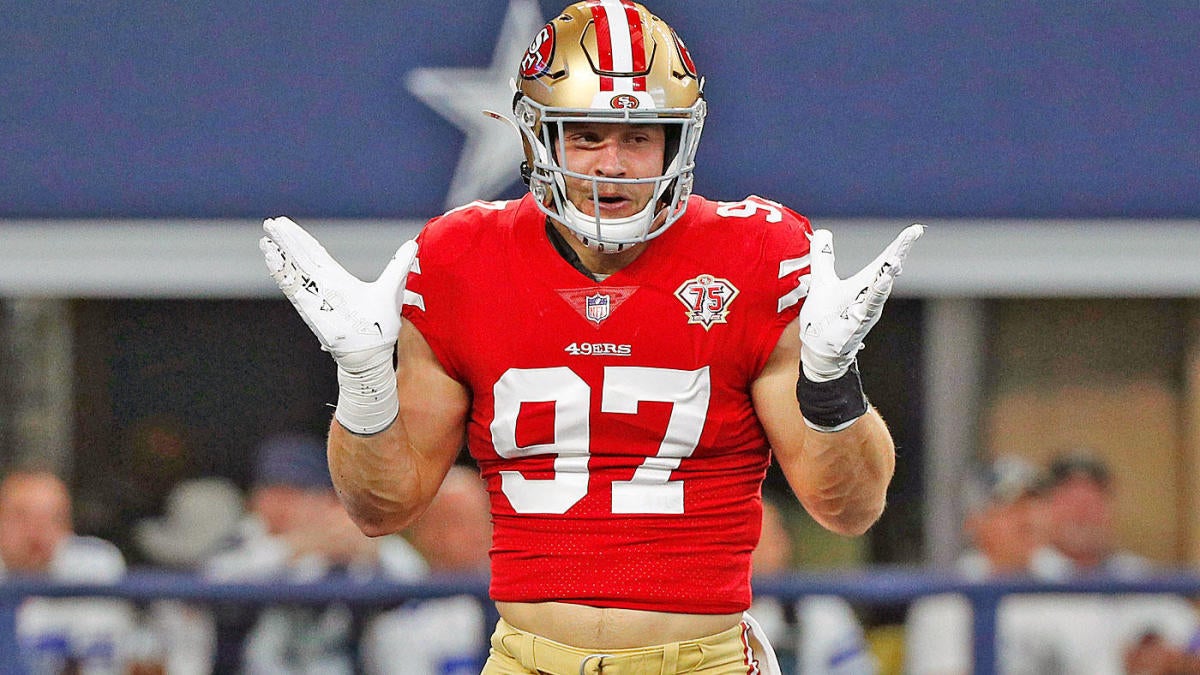 San Francisco 49ers general manager John Lynch revealed on Tuesday in a season-ending press conference that new contracts for defensive end Nick Bosa and wide receiver Deebo Samuel were on his radar screen. “With (Samuel) and Nick, we fully understand these guys are pillars of what we’re trying to do here. … We have really good lines of communication with their representatives. Those will continue,” Lynch said.

As 2019 draft picks, Bosa and Samuel became eligible to sign contract extensions after the 2021 regular season ended on Jan. 9. Lynch didn’t give a timetable for new deals but Samuel should be more of a signing priority since 2022 is his contract year.

Bosa didn’t show any ill effects from the left ACL tear he suffered in San Francisco’s second game last season. The 2019 NFL Defensive Rookie of the Year was fourth in the NFL with 15.5 sacks this season. Bosa was named a starter for the NFC in the Pro Bowl for the second time in his three NFL seasons. He also earned All-NFL/All-Pro honors from the Pro Football Writers of America and the Sporting News.

It’s going to take more than just a good line of communications to get a deal done with WME Sports’ Brian Ayrault because he is a shrewd negotiator who drives a hard bargain. Ayrault made Rams interior defensive lineman Aaron Donald the NFL’s first $20 million-per-year non-quarterback in 2018. The three-time NFL Defensive Player of the Year signed a six-year, $138 million contract extension averaging $22.5 million per year.

The deal contained $86.892 million in guarantees, which included a $40 million signing bonus. These figures set new standards for non-quarterbacks.

More recently, Ayrault put Chargers defensive end Joey Bosa, Nick’s older brother, at the top of the non-quarterback pay scale in 2020. The older Bosa signed a five-year, $135 million extension averaging $27 million per year. His $102 million in overall guarantees and $78 million fully guaranteed at signing were both the most ever in an NFL contract for a non-quarterback.

Ayrault will surely be looking to reset the non-quarterback market in any deal with the 49ers. The financial benchmarks of key contract metrics that should be relevant to Nick Bosa’s contract discussions are listed below.

Professionals within the industry (agents and team negotiators) typically value deals by new money, which is the amount of compensation in a contract excluding what a player was scheduled to make before receiving a new deal. For example, Joey Bosa had one year remaining on his existing contract with a $14.36 million salary for 2020 prior to his signing. Although Joey Bosa signed a six-year contract for $149.36 million, his deal is considered as a five-year, $135 million extension, averaging $27 million per year among industry professionals. His existing contract year for $14.36 million is subtracted from the $149.36 million six-year total to arrive at this number.

Compensation in the first three new years is the amount of money in a contract exclusive of what a player was scheduled to make before receiving a new deal, just like with new money when determining average-yearly salary. The cash flow analysis looks at the compensation in its totality. The focus is on the amount of money received in the first three years of a contract regardless of whether it’s considered as new money. Both metrics have the same dollar amount when a player signs a new contract as a free agent or when his contract is set to expire.

Overall contract guarantees can be misleading. A complete picture of a contract’s true security isn’t given by this metric. The amount of money fully guaranteed at signing and will become fully guaranteed early in the contract are the best and most accurate measures of security.

How much Nick Bosa could get

It’s hard to imagine Ayrault agreeing to any deal that doesn’t make Nick Bosa the NFL’s highest-paid non-quarterback with record-setting guarantees and a player-friendly structure given his track record with Donald and Joey Bosa. Donald got 17.9% more than Broncos edge rusher Von Miller, who had been the non-quarterback standard bearer on the six-year deal he signed in 2016, averaging $19,083,333 per year. Joey Bosa’s deal represented an 8% increase over the five-year, $125 million extension Browns defensive end Myles Garrett had just signed to become the league’s first $25 million-per-year non-quarterback. Garrett, the first overall pick in the 2017 draft, had two years remaining on his contract just like Nick Bosa — the second overall pick in 2019 — will once the 49ers formally pick up the option year.

This would put Nick Bosa’s deal between $30.25 million and $33 million per year based on the increases Ayrault got for his brother and Donald. Ayrault will likely have the distinction of negotiating the first $20 million-per-year and $30 million-per-year non-quarterback deals.

Packers All-Pro wide receiver Davante Adams, who has an expiring contract, is reportedly targeting $30 million per year. It’s ambitious because the two-year, $54.5 million extension DeAndre Hopkins received from the Cardinals, averaging $27.25 million per year as the start of the 2020 regular season was approaching, is considered to be a contract anomaly for the wide receiver market.

The 49ers will want five new contract years from Bosa if linebacker Fred Warner’s deal is any indication. Warner was the first off-ball linebacker to hit the $19 million-per-year mark with the five-year extension he received from the 49ers just before the start of training camp.

Taking these dynamics into consideration, Bosa could get a deal along the lines of the following if the timing is similar to Garrett’s contract, which was signed about two weeks before the start of training camp in 2020.

There would be a dramatic jump in Bosa’s cap numbers beginning in 2024. This shouldn’t be problematic for the 49ers because there should be significant growth in the salary cap by then and not having to contend with a high-priced quarterback will make it easier to handle a massive Bosa contract. The earliest quarterback Trey Lance, whom the 49ers moved up from the 12th overall pick to the third pick to select in the 2021 NFL Draft, will be able to sign an extension is in January 2024 after the 2023 regular season ends. Lance would have manageable cap numbers in a new deal until 2027 or 2028 depending on the timing of any extension by utilizing this same concept. Bosa’s cap numbers for the rest of the deal probably wouldn’t get above $36.5 million at any point if he’s given a $25 million signing bonus and a $25 million option bonus.

An exclusion of sizable per-game roster bonuses in the extension years (2024 through 2028) probably would be a deal-breaker for the 49ers given Bosa’s injury history and their standard practices. Large annual game day active roster bonuses are customary with 49ers veteran contracts of any significance. The primary benefit of the roster bonuses is they provide the 49ers some financial relief with injuries. The per-game amount is only payable if the player is on the active list for that particular game. For example, offensive tackle Trent Williams, whom the 49ers made the NFL’s highest-paid offensive lineman at $23.01 million in free agency last March, has $750,000 of annual per-game roster bonuses ($44,117.65 each game) in his contract.

The potential for a Bosa holdout if there is a contract stalemate can’t be dismissed. Bosa might not want to play any longer than required before a big payday because of the ACL tear that sidelined him for almost all of the 2020 season.

Ayrault doesn’t have any qualms about a client holding out when he feels it’s warranted. The Joey Bosa engaged in the longest contract dispute for an incoming NFL player under the rookie wage scale in 2016. Bosa was the first rookie since 2013 that didn’t show up to training camp on time. He missed 31 days before signing his contract.

Donald held out after his third NFL season in a quest for a new contract. He didn’t report to the Rams, without a new deal, until right before the 2017 regular season started. Donald staged a second holdout in 2018 that lasted the entire preseason before he became the charter member of the $20 million-per-year non-quarterback club.

The penalties for holding out are more severe in the 2020 NFL/NFLPA Collective Bargaining Agreement. Teams are required to fine players who aren’t on rookie contracts $50,000 per day with training camp absences. Players on rookie contracts, like Bosa, are subject to a $40,000-per-day fine. Unlike with the $50,000-per-day penalty, the 49ers would be able to waive or reduce Bosa’s fines.

Bosa wouldn’t get a year of service for free agency, which is an accrued season in the CBA, if he didn’t report to training camp on time regardless of how many 2022 regular-season games he subsequently played. It wouldn’t be a big deal with an unsuccessful holdout, like Donald’s in 2017, because 2023 would be his option year.

The harsh economic consequences of holding out have led players in contract disputes to “hold in” to avoid the fines. Watt was essentially a spectator in Pittsburgh’s training camp practices until a few days before this season’s first game when he became the NFL’s highest-paid non-quarterback with a four-year, $112.011 million extension, averaging $28,002,750 per year.

Bosa would still be the best bet to be the first non-quarterback to hit the $30 million-per-year mark if he played the 2022 season on his rookie contract. The relationship between Ayrault and the 49ers would have to deteriorate for there not to be a deal in 2023.

The 49ers are proactive in signing core players to extensions before free agency becomes a consideration. Waiting until 2023 to reward Bosa will likely be more costly for the 49ers. Bosa having another Pro Bowl-caliber season in 2022 could push the contract into the $33 million-per-year neighborhood where Ayrault is adamant about getting the type of increase he secured for Donald over Miller.