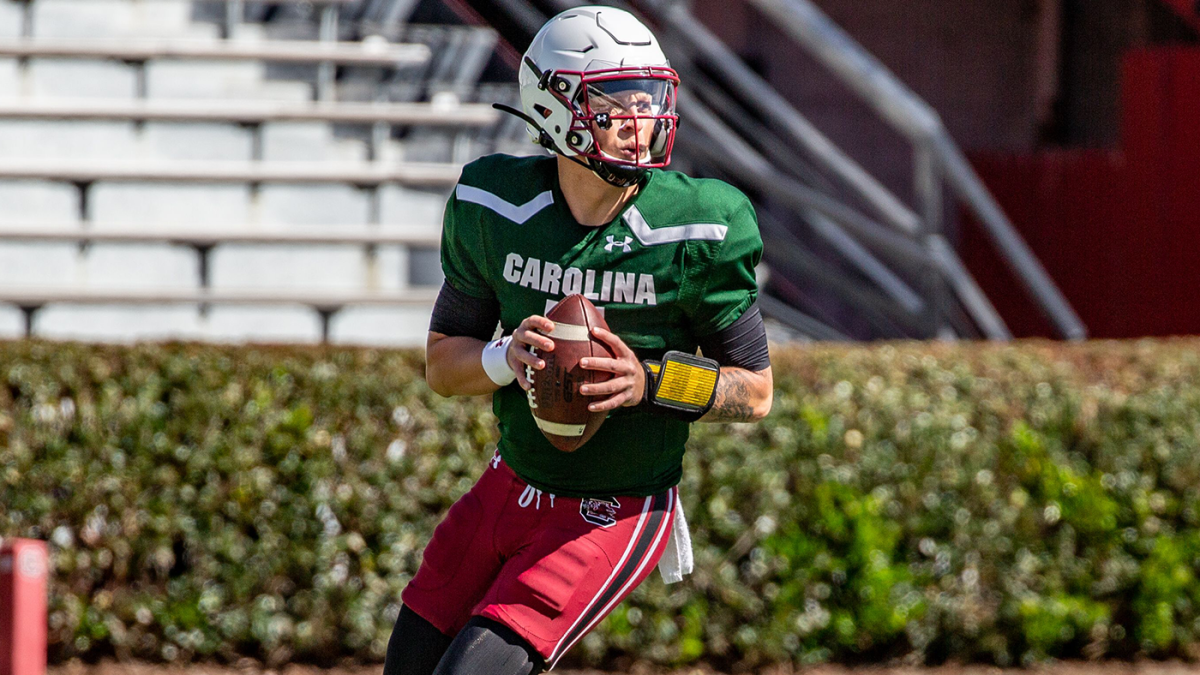 “You want to play quarterback?” Giovando began before a recent throwing session at a local high school. “Get ready for everybody to say you suck. It doesn’t matter. Get ready for that. That’s going to happen no matter who you are.

“Every play you’re on the field, you’ve got four guys up front that want to break your neck. All eyes are on you. It’s going to be your fault. If you can’t handle that, and if you want to point your finger at other people, don’t play this position. Don’t play quarterback.”

Stern stuff, perhaps, for a bunch of middle schoolers, but Giovando is talking about a tough position in a tough world.

Just ask Giovando’s special guest that day: Phoenix-area native Spencer Rattler was there to speak three years into his college experience while visiting home from his new school, South Carolina.

It was a year ago that Oklahoma’s then-quarterback was being celebrated as the Heisman Trophy frontrunner after throwing for 28 touchdowns and 3,000 yards as Jalen Hurts’ successor. In 2020 with Rattler, the Sooners won a sixth straight Big 12 championship with eight straight wins to end the season after an 0-2 start in league play.

“I don’t know what happened in 2021,” South Carolina coach Shane Beamer told CBS Sports. “I know what I saw in 2020. That’s the Spencer Rattler that I’ve seen since he came here.”

What happened in 2021 is open to several interpretations. It is also why Rattler’s emergence with the Gamecocks is one of the bigger stories of the offseason. It was both a curious transfer choice and one that made perfect sense. South Carolina’s quarterback situation last year was so dire that a graduate assistant suited up.

A run through the SEC is likely to prove whether Rattler is indeed an elite quarterback. For now, the story of how the kid from the Valley of the Sun by way of central Oklahoma ended up in the Palmetto State remains open ended.

“The hype [over my arrival at South Carolina] … is not as crazy as it was in the past,” Rattler said.

No, nothing could top that. When Rattler debuted in mop up duty against South Dakota on Sept. 7, 2019, he was the future, the latest in a long line of recent Oklahoma quarterbacks who produced Heismans and championships with statues erected along the way. Rattler was replacing Hurts, who had replaced Kyler Murray, who had replaced Baker Mayfield.

In 2020, Rattler won that Big 12 title, though he was famously benched in the Texas game only to come off the sideline to lead a four-overtime win. Last year, a portion of Oklahoma’s own fans turned on him, chanting, “We want Caleb.” That would be Caleb Williams, then a celebrated freshman who has since transferred to join Lincoln Riley at USC.

Once again, in 2021 against Texas, Rattler was benched after a couple of turnovers. This time, he stayed on the sideline — save for a key two-point conversion throw — as Williams led an OU comeback from 21 points down.

Rattler was never the same again. Williams took over the starting job, going 5-2 down the stretch. Last month, Rattler told ESPN there was a “toxic situation” at Oklahoma.

He did not elaborate when asked about the comment by CBS Sports.

“I decided not to answer questions about Oklahoma in interviews anymore,” Rattler said. “Even Coach Beamer was like, ‘Let’s chill on the Oklahoma questions.’ I kind of just avoid it.”

What he can’t avoid is how he was treated by that subset of critics in the end of his OU tenure. We all saw it. During a narrow win over West Virginia, Oklahoma fans booed Rattler and called for Williams. The next week at Kansas State, Rattler played one of the best games of his career, completing 22 of 25 passes to lead OU to scores on 10 of its last 12 possessions.

Later, Rattler was one of only four Sooners to exchange high fives with the Oklahoma rooting section.

“Those were the real fans up there,” he said that day.

Giovando is a cool-breeze philosopher wearing a floppy hat to keep the sun off his skin. It makes him sort of a hip sage offering tips and encouragement to elementary schoolers and college prodigies alike.

“I think they got spoiled [at Oklahoma] from beating up on people so much that the fans were like, ‘Wait, why was this a close game?'” Giovando offered as an explanation. “My dad used to say, ‘The other team is allowed to play hard.’ If you’re not ready for that on all levels, guess what, you’re going to be in a freakin’ fight every week.”

Five games into his senior year of high school, Giovando, also a quarterback, was injured. He didn’t play for eight more years. In between, he got into a band, almost signed a record deal and — at age 27 — decided to try junior college football. He tore his rotator cuff and patella tendon … and that was that.

It’s that kind of street cred that endears Giovando to the Valley’s best and brightest.

During his visit here, Rattler spoke to the campers rather than at them. “Gio” and his quarterback played off one another. Their relationship goes back a decade when Giovando discovered Rattler in youth football. Giovando had just returned from overseas helping launch the now-defunct Elite Football League of India when he noticed Rattler.

“He was standing there all poised, slinging it, ripping it,” Giovando said. “There are plenty of [other private coaches] who have reached out to Spencer. In seventh grade, I moved him up to play to [compete against] high school guys. It made him better.”

Now, Rattler is the front-facing product of Giovando’s business, which boasts 700 trained signal callers who have earned a combined 300+ scholarships.

“I always come back to Arizona to be home,” Rattler said. “It’s easy because Mike is here. I’ve seen my game take off. … I’m a real loyal person, and he’s been one of the real close ones in my circle.”

On this day, Giovando is trying to relay Rattler’s story to the kids while the quarterback is focused more on the technical aspects of playing the position. Rattler diagrammed a South Carolina play on the white board that contained 13 words. At Oklahoma, where Riley’s offense was based on Mike Leach’s Air Raid scheme, there were simple calls like “6.”

“All verts,” said Rattler, describing a play in which all the wide receivers go deep.

The quarterback says South Carolina offensive coordinator Marcus Satterfield’s offense will help broaden his NFL prospects with not only more plays under center but even huddling. In preparation for the new experience, he watched film of Joe Burrow at LSU in 2019.

Actually, it’s a gumbo of all that. South Carolina, Beamer, Satterfield and Rattler could desperately use a jump start in different ways. In the SEC last season, only Vanderbilt had fewer passing plays of 10+ yards, scored fewer points and gained fewer yards than the Gamecocks.

“When you look at what Oklahoma did offensively, you’d be crazy not to do what they do,” said Beamer, Riley’s tight ends coach from 2018-20 prior to taking the South Carolina job. “Yes, Spencer will get under a center a bit more. Yes, he will get in the huddle a little bit more. What we’re asking him to do at the line of scrimmage is a little bit different. He got under center a bit at Oklahoma. He got in the huddle some at Oklahoma, [too]. I think that was appealing.”

On paper, Rattler’s transfer has been an absolute steal for Beamer and the Gamecocks. In the SEC — really, everywhere — if you’ve got a quarterback, you’ve got a chance.

Despite that struggling offense, Beamer grinded his way to a 7-6 debut last season that ended with him being named co-winner of the Steve Spurrier Award given to the outstanding first-year head coach by the Football Writers Association of America.

In the history of the transfer portal, has there ever been a more experienced ready-to-roll Power Five quarterback? Rattler is 15-2 as a starter having completed 70% of his career passes.

For Rattler, it’s a comfortable reboot. Oklahoma teammate, tight end Austin Stogner, has transferred as well. Stogner is among those who have not given up on Rattler after his exit from OU. More so, the world is waiting to see how he handles the transition.

“I always tell him, ‘Look, bro, if you think this is the worst thing that is going to happen to your life, you’ve got another thing coming,'” Giovando said. “‘You’re not terminally ill. You didn’t lose a family member.