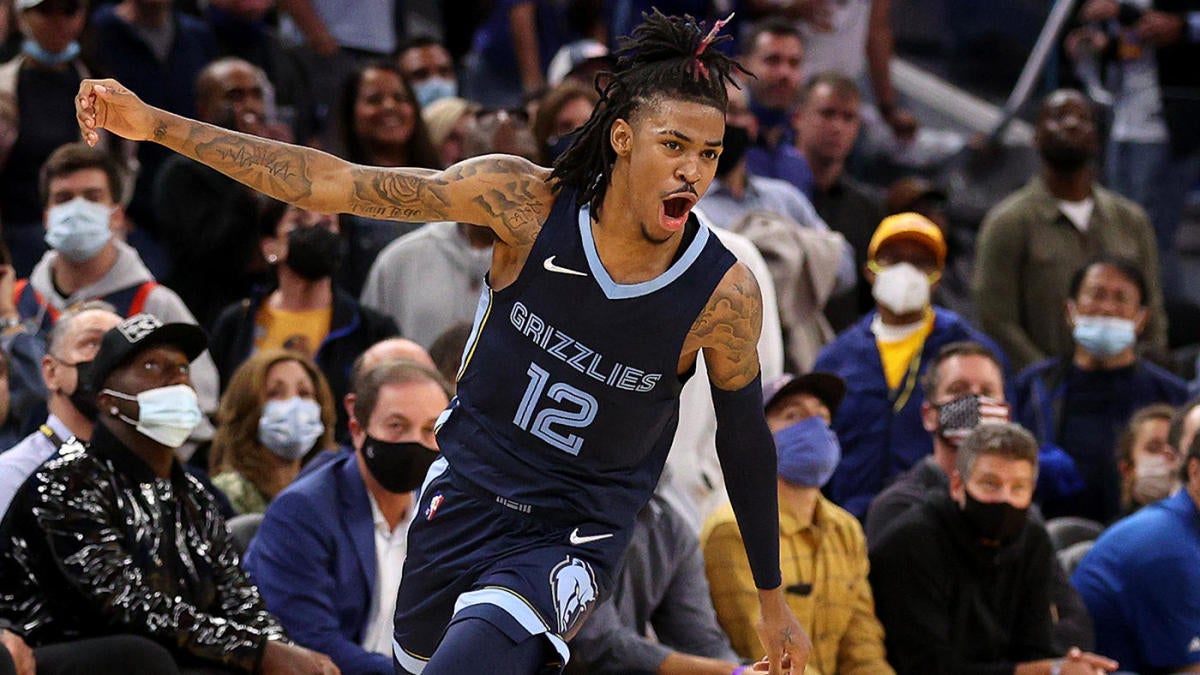 SAN FRANCISCO — Ja Morant recently said he was annoyed that he didn’t make the All-Star team in either of his first two NBA seasons. If he keep this up, an All-Star appearance might be the least of his accolades.

The uber-athletic 22-year-old Memphis Grizzlies point guard has been one of the most unstoppable players in the league to start the 2021-22 season, leading the NBA with 30.4 points per game to go along with 7.8 assists and 5.4 rebounds while ushering the Grizzlies to a 3-2 start. On Thursday night, Morant showcased his uncanny ability and unlimited potential in a 30-point, seven-rebound, five assist performance to hand Stephen Curry and the Golden State Warriors a 104-101 overtime loss, their first of the season.

It was more than his stats, however, that made his game so impressive. Morant made numerous big plays, first to get his team back into the game after falling into a 37-20 first-quarter hole, then to win it at the end. He scored 21 of his 30 points and picked up three of his four steals after halftime, and made an absurd spin move that led to a crucial bucket with less than a minute left in overtime.

He also helped limit Curry, who scored 36 points on the night, to zero points in the fourth quarter and overtime. Morant said he felt like he was “asleep” in the first half, and woke up with 18 third-quarter points to bring his team back. That’s evidence of the leadership arc that has been building over his first three seasons in the league.

“He’s just taken huge steps all around, as a player, as a leader. He’s finding his voice,” Grizzlies coach Taylor Jenkins said of Morant. “He’s been finding it for the first two years, but even now, just more confidence in what he’s got to do to lead this team. … Just his positivity, just communicating with the guys in the flow of the game, in timeouts. His voice is resonating throughout, and everyone is just helping to follow his lead and responding.”

Morant’s early-season performance doesn’t come as much of a shock to those who watched the former Rookie of the Year evolve over his first two seasons, culminating in a playoff debut for the ages in a first-round loss to the top-seeded Utah Jazz this past June. In his first NBA playoff series against the league’s best regular-season team, all Morant did was put up 30.2 points, 8.2 assists and 4.8 rebounds per game.

This season has been even better, as he’s lasered in from 3-point range, hitting 40.6 percent of his 6.4 attempts per game. In Thursday’s win, Morant took a page out of Curry’s book, hitting his two 3-pointers from 29 and 30 feet out — he made just six 3s from that distance all last season — including a bomb over Defensive Player of the Year finalist Draymond Green to give Memphis the lead late in the fourth quarter.

The ability to knock down 3-pointers opens up the floor for Morant’s primary talent — getting into the teeth of the defense to make plays for himself and others. As his game has evolved with experience, Morant has become an expert at reading the defense and making the right play.

“[Morant] knows what he wants the defense to do, so he’s just gonna manipulate that to what he wants,” Grizzlies forward Jaren Jackson Jr. said. “You just see time and time again, his mental is just above pretty much anyone. It’s just above. With that type of mental, he can make reads that a lot of people can’t.”

Jackson said he often picks Morant’s brain during games to get a sense of how he’s seeing the floor and how the team can work better together. Part of Morant’s leadership growth has come from his strong relationship with Jenkins.

“Me and his relationship has gotten better over the years, learning each other,” Morant said of Jenkins. “We both hold each other accountable in a lot of things and have different conversations, go to dinner. Just building our relationship.”

That’s part of the reason why the Grizzlies are ahead of schedule, just missing the playoffs in Morant’s rookie season before beating the Warriors in the play-in to earn a spot this past spring. With Morant having the look of an All-NBA selection to start the season, surrounded by fellow young talents Jackson Jr., Desmond Bane, De’Anthony Melton and Dillon Brooks (when he returns from injury), Memphis isn’t a team anyone wants to face in the playoffs.

“We’ve got a great team, a great group of guys,” Morant said after Thursday’s win. “Everybody’s capable of doing different things on the floor, which makes us a very dangerous team. You just can’t focus on one guy.”