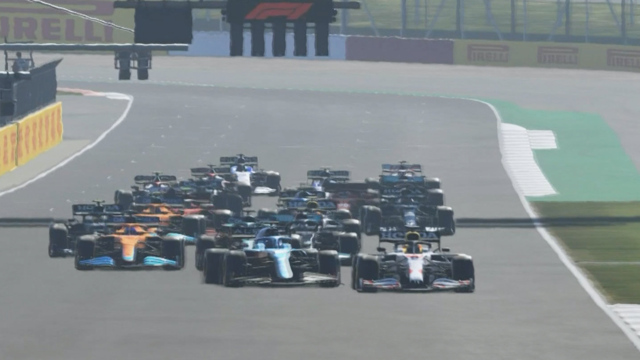 Red Bull Racing Esports made a return to form on Wednesday, as they swept both wins in Silverstone and Monza, in the 2021 F1 Esports Series Pro Championship, presented by Aramco.

Last season’s championship runner-up Frede Rasmussen, and then Marcel Kiefer both took their first wins of the season in a double-bill of frantic racing action. However, it was not without pain and controversy, as a potential 1-2 went begging.

Rasmussen took pole around Silverstone on Wednesday afternoon, putting his white-liveried Red Bull in prime position to take maximum points. The one-off livery has been available in-game for some time now, presenting the team with an opportunity to race it once again.

Pole was of course the best seat in the house, and Rasmussen led comfortably, pursued by Nicolas Longuet and Bari Boroumand. Lucas Blakeley lined up fourth, with his main championship rival Jarno Opmeer out of contention after qualifying a disappointing P15.

The pit stops shuffled the pack, Dani Moreno was able to jump from fifth to a net second place, behind Rasmussen and team mate Opmeer who had yet to pit.

That changed on Lap 11, when Moreno blasted past the Dane into Stowe. From then, it was a three-way duel between them and Blakeley, who patiently watched from third place, praying for an opportunity to get past.

This feature is currently not available because you need to provide consent to functional cookies. Please update your cookie preferences

The trio were inseparable in the dying laps, but it all came to a head on the very last lap, as Rasmussen used all his remaining power to get past on the back straight, crossing the line to deny Moreno his first win.

Blakeley completed the podium, with Longuet and Boroumand not far behind. Brendon Leigh equalled his best finish of the season so far in sixth, followed by Marcel Kiefer, Joni Tormala, Opmeer, and David Tonizza.

WATCH: All the action from Round 3 of the 2021 F1 Esports Series Pro Championship

The excitement did not die down as attentions turned to Monza. Opmeer perfected qualifying this time round, and took pole position. No one could contain the pace of Boroumand, who started from P7 but rapidly ascended; the only driver to start on soft rubber. By Lap 3 he was in third place, and at the beginning of the fourth tour, he led after slipstreaming leaders Opmeer and Kiefer to make a double-pass for the lead!

Despite the spectacle, Boroumand’s alternate strategy meant the real fight for the lead was behind him. Pit stops came and went, and as the race developed, a Red Bull Racing Esports 1-2 looked to be on the cards, with Kiefer and Rasmussen leading the train.

The race reached boiling point late on, as Opmeer on Lap 15 appeared from nowhere to snatch P5 from Blakeley. The following lap, he went one better, taking Longuet’s fourth place, and team mate Moreno also barged his way through.

Rasmussen’s tyres were crying for respite with two laps to go, as he dropped to third after being dispatched by Fabrizio Donoso. That was nothing compared to the final lap though. After being mugged by both Mercedes cars into Turn 1, Rasmussen was tagged from behind by Tonizza, and half-spun, dropping way down the order.

READ MORE: 7 reasons 2021 will be the best F1 Esports season yet

Kiefer carried on and took the win, with Opmeer second and Blakeley third once again. Donoso took fourth, with Sebastian Job getting his first points in F1 Esports in a superb fifth.

This feature is currently not available because you need to provide consent to functional cookies. Please update your cookie preferences

All this means Opmeer (83) retains his championship lead, with just a four-point advantage over Blakeley (79). First wins for Rasmussen (53) and Kiefer (50) launch them up the order, with the ultra-consistent Boroumand (51) sat in between.

Mercedes (122) hold a slender lead over Red Bull (103) in the team standings… sound familiar? Aston Martin drop to third with 87 points, and Alpine Esports are in fourth with 63.

All eyes on Spa

We’re not done yet! Join us for the third and final race of this round in Spa on Thursday, as we look to crown another race winner. Rasmussen won this race in 2020, but Dani Bereznay took the W in the two years prior. Can he spring a surprise and return to the top step this year?