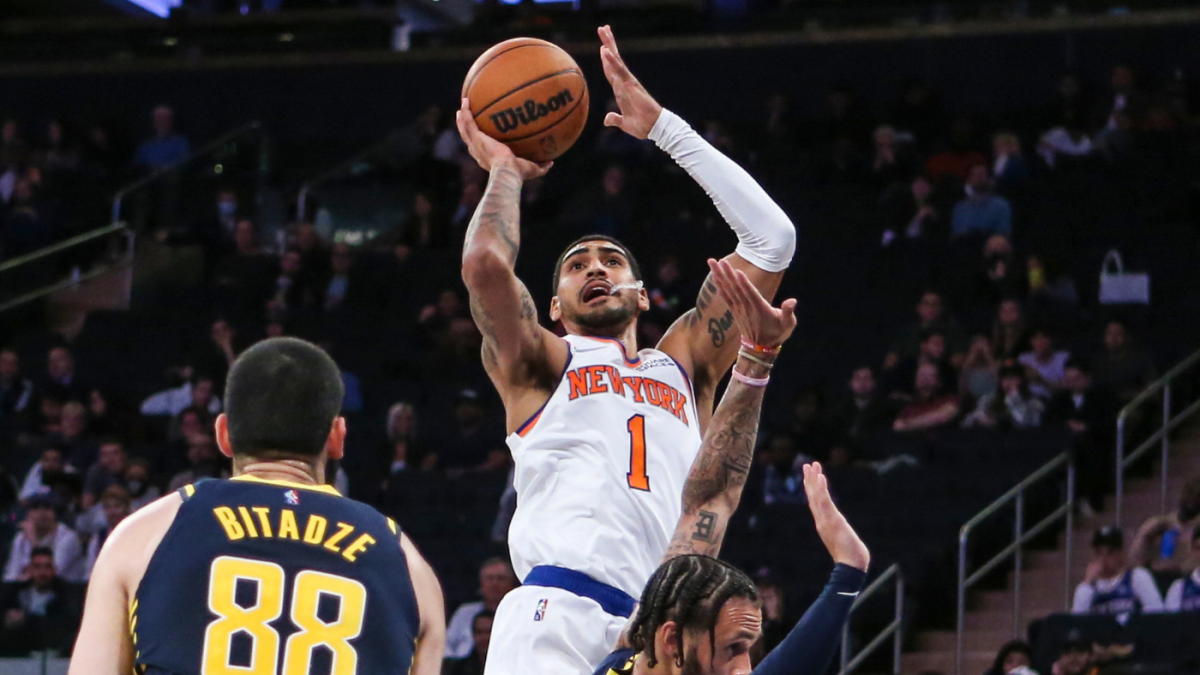 Do yourself a favor the next time you catch a Knicks game and just watch Obi Toppin after an opponent misses a shot. Count the number of players that are closer to the opposite basket than he is. It doesn’t matter how many there are. He’s going to beat all of them down the court.

He is literally the furthest Knick from the basket when this pass is batted. Three Orlando players should be able to offer some token resistance as well. Nope. Toppin flies to the other end of the court so quickly that he has to slow himself down to make sure he doesn’t fall out of bounds.

Transition Toppin is breathtaking, a heat-seeking missile with the instincts to launch itself the moment an opponent passes into traffic or shoots an ill-advised 3. The numbers, dating back to his collegiate career, are utterly preposterous.

A lot of this is, obviously, natural. Toppin is bigger, faster and stronger than most of the players that he faces, and he reminds them of that in transition regularly. But running the floor is sheer effort. In these frenetic moments, Toppin is just playing harder than everybody else. There are few traits teams would rather cultivate in young players. Toppin is far from a finished product, and the rough edges of his game may never be sanded down, but he’s a worker. He’s going to make the most of the opportunities that he gets. There just haven’t been very many of them for him in New York thus far.

That’s no fault of his. Toppin was drafted to replace Julius Randle. Randle immediately became an All-Star. Such developments aren’t exactly common, but they happen. Plans change. Teams adjust to the circumstances that they face. The Knicks did so for Randle, but largely haven’t for Toppin. After improving meaningfully down the stretch last season, acquitting himself well in the postseason against the Atlanta Hawks and posting two of the best games of his career to start the 2021-22 season, Toppin finds himself in essentially the same position he’s been in since he was drafted.

Randle and Mitchell Robinson start for the Knicks in the frontcourt, but with Taj Gibson and Nerlens Noel out for the first two games of the season, Toppin played nearly 52 combined minutes in two wins. He’s averaging roughly 12 minutes since Gibson returned. Gibson, who is 36 and was out of basketball until the Knicks signed him in the middle of last season, is averaging 16.7 minutes in those same games. There’s no telling how minutes will be allocated when Noel returns, but history says Tom Thibodeau isn’t taking them from his starters. Gibson has been a favorite of Thibodeau’s since their time together in Chicago and is currently playing more than Toppin. Noel just signed a three-year contract. It’s not hard to envision a scenario in which Toppin is fighting to see the court at all.

It’s a first-world problem. The 4-1 Knicks are playing great. They’re coming off of a No. 4 seed and prioritizing immediate results over long-term ambitions. Immanuel Quickley has been victimized by the same mandate. Despite an excellent rookie season, Quickley has lost over a quarter of his minutes thanks to the addition of Kemba Walker. But Toppin’s marginalization carries higher stakes for a multitude of reasons.

In pure basketball terms, it’s just harder for a big man to assert himself than it is for a guard like Quickley. As dominant as Toppin has been in transition, the Knicks hardly include him in their half-court offense. He’s attempted only 18 shots in the halfcourt through 89 minutes of play this season. That’s roughly one shot per five minutes, not far off from Gibson, who has taken nine shots in the half-court across 50 minutes. Gibson is, again, a 36-year-old journeyman. Toppin was a lottery pick based on his offensive acumen less than one calendar year ago, but the Knicks are barely using it. More than half of those 18 shots in the half-court have been spot-up attempts. The Knicks too frequently relegate him to spacing duties, though not for lack of trying on Toppin’s part. His stints are frequently filled with crafty cuts near the basket.

The Knicks can make more of an effort to get him the ball outside of those magnificent full-court sprints. Taking advantage of that frenetic transition energy early in half-court settings, when defenses are still scrambling, would be a good start. Even if he’s not finishing the play, good things happen when Toppin barrels downhill.

But any changes the Knicks make to how they use Toppin are immaterial if they don’t change how much they use him. Doing so fundamentally challenges several of Thibodeau’s core tenets as a basketball coach. He doesn’t like leaning on young players. Forget about trading for Derrick Rose in the midst of Quickley-mania last season, Thibodeau didn’t start a second-year Jimmy Butler until injuries to Marco Belinelli and 34-year-old Rip Hamilton forced his hand. He’s a defense-first head coach. The fully-realized version of Toppin might not be a particularly good defender, and the sophomore version of him certainly isn’t there yet. His defensive mobility has never quite aligned with his straight-line speed and he struggles mightily in pick-and-roll situations. At a bare minimum, Toppin needs seasoning defensively.

The core problem here is that Thibodeau relies more on his best players than any other coach in basketball. His best player is a power forward. So is Toppin. Thibodeau isn’t going to sacrifice Randle’s minutes for the sake of Toppin’s growth, so the only real solution to getting him more time on the floor is to play the two of them together.

In tiny samples, the pairing has worked, but the emphasis there is on the word tiny. Thibodeau played them together for only 39 total minutes last season. They outscored opponents by four points in that span. Those injuries forced his hand early this season, and in the first two games this season, they shared the court for 23 minutes. They outscored their opponents by 21 in that span. Gibson’s return spoiled any plans for further experimentation. They’ve spent only three minutes together since.

But the pairing makes plenty of theoretical sense offensively. Randle often functions as something resembling a point guard and Toppin is a comfortable jump-shooter (though his NBA numbers haven’t yet reflected his collegiate success), so it’s not as though they’d need to occupy the same spaces. The idea of a Randle-Toppin pick-and-roll should terrify opposing defenses, most of whom don’t have two legitimate defensive bigs on the floor at the same time. Duck under a Toppin screen and Randle can shoot. Switch it and let whoever gets the smaller defender bully him to the basket. But in parts of two seasons together, the Knicks have not once finished a play with a Randle-Toppin pick-and-roll.

It’d be a bit melodramatic to suggest that has to change. We are again dealing with what is currently a first-world problem, after all. The Knicks are doing just fine for the moment without our intervention. That just doesn’t excuse poor long-term organizational process, a concept Thibodeau has long struggled with as a coach fixated on winning the game in front of him and only the game in front of him. Giving Gibson 20 minutes per night may or may not help him do that. But giving a 36-year-old minutes that a second-year lottery pick has earned with his play is borderline malpractice with ramifications that a coach with such short-term fixations as Thibodeau just isn’t acknowledging.

Toppin might be able to grow defensively and he might not. He might be able to shoulder a bigger half-court load and he might not. The Knicks won’t know until they give him the minutes to find out, and finding out is rather important for a franchise that now appears somewhat entrenched in at least a moderate degree of competitiveness. The Knicks aren’t going to have another No. 8 overall pick again any time soon. They aren’t going to get many more chances to swing on a talent like Toppin’s, and perhaps more importantly, they aren’t going to get many more chances to develop that talent for a possible trade suitor. He can’t prove his place in any long-term roster plans from the bench.