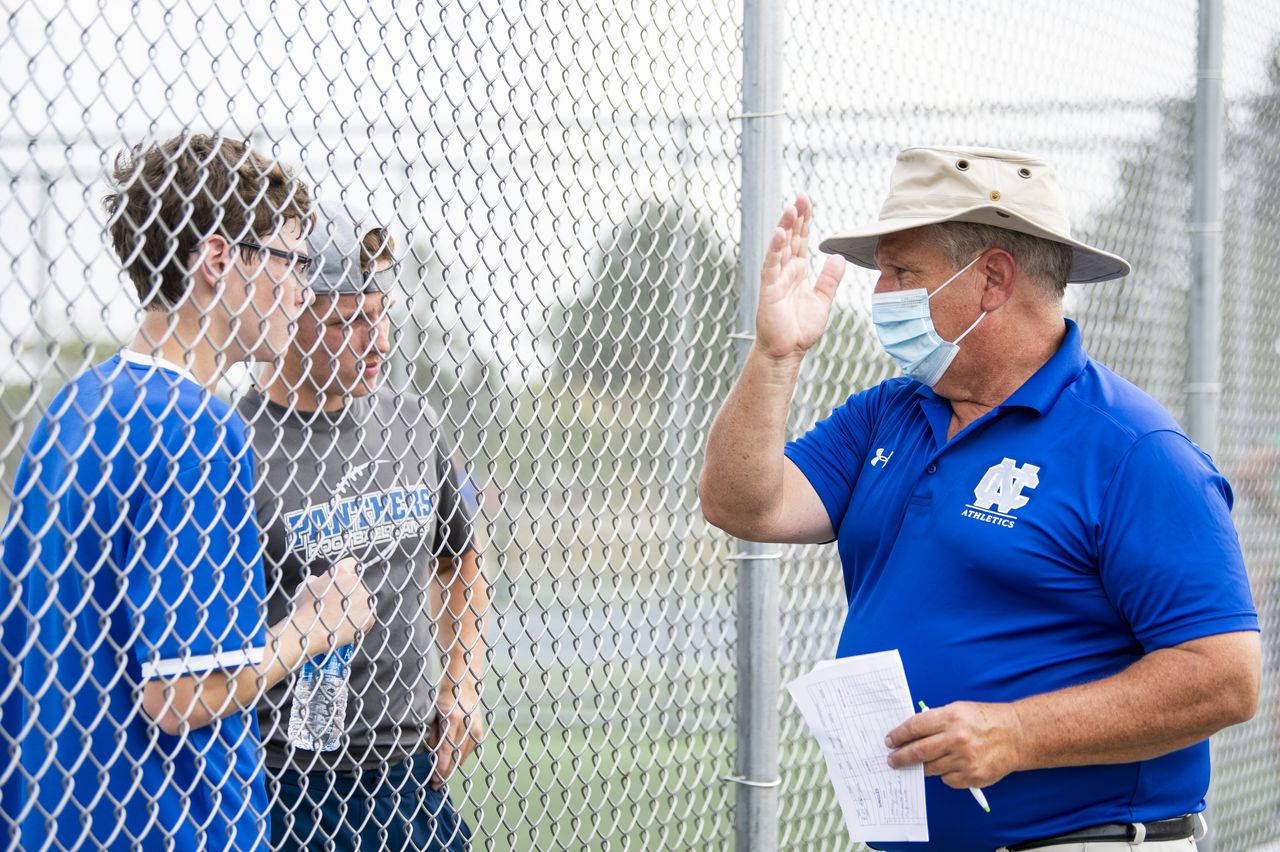 Scott Symons can measure his success as a tennis coach in years or wins.

“I was at a wedding with Tim Ryan over the weekend … his daughter (Jenny) and my daughter (Maggie) were classmates K-12,” Symonds said. “We talked about coaching, and I told him the biggest rewards are the times that the kids have and the stories they remember.

“They’re not going to remember the wins and the losses. I’m not sure Tim believed me. But then one of the girls walks up and sits at our table and starts talking about the time we practiced at the (Saginaw) Country Club and a girl hurt her knee and we had to call EMS. They remember the stories. The stories become memories. That’s what’s rewarding.”

Symons, 61, played for Bob Quinn at MacArthur, helping the Generals finish third in the state in 1979 as the No. 3 singles player.

But he didn’t coach until 2002, when his daughter, Stephanie, was a freshman on the Nouvel team.

“I never showed up for practice … I didn’t want to be a helicopter parent,” Symons said. “But they had a weekend tournament in Traverse City that was at two different sites. So I asked Tom Lawler, the coach at the time, if he needed help.

“I ended up becoming an assistant coach. I’ve had more fun as the assistant coach with Tom than I did as the head coach. Tom coached for seven years and started the girls program at Nouvel. Tom retired, but I kept coaching.”

“I’ve stepped down as the coach twice … I just kind of get recycled and retreaded,” Symons said. “Three years ago, they called me two nights before season started. They couldn’t find a coach.

“This is the first time I started the season with 12 people. It’s not fun when you have less than 12 because when you go to a tournament, you can’t win. I want to have a chance to win. I told the kids that if you want a coach, great. If you want a babysitter, I’m not that guy. If you don’t have 12, I’m going to retire. I challenged the kids, and they came through.”

“We got pounded by them last year, but we took care of things this year,” Symons said. “I love to see the difference from the start of the season to the middle of the season to the end. I love to see their growth as tennis players and the growth of their confidence as young adults. You can see the change, and it’s not all tennis. It’s fun to watch them grow and get that confidence.”

Symons isn’t sure how much longer he’ll coach, which is normal.

“I tell the school in January or February if I have enough gas to get through the next year … I’m a year-to-year employee,” Symons said. “I’ve been a part of seven of the nine regional championships they have here in tennis.

“I’ve had a lot of fun. I can’t tell you how much longer I’ll coach. It’s still fun. When it doesn’t become fun anymore, everyone will know. But I’ve been fortunate. It’s been fun. The parents have been great.”

With sophomore Averie Pumford leading the way, Freeland claimed the second Tri-Valley Conference jamboree, edging Frankenmuth Wednesday at Crooked Creek Golf course. Pumford shot an 82, with teammate Zoey Markey second with an 87 for the Falcons (394). Frankenmuth shot a 396, led by senior Molly Pergram’s 89.  St. Louis won the TVC 10 portion of the meet with a 410, with Ithaca next at 430. Josie Schrot (92) and Natalee Hoyt (93) led the Sharks, with Ivy Davenport shooting a 95 to lead Ithaca.

Mary Richmond finished third with a season-best time of 18:36.20 to lead Frankenmuth to a seventh-place finish at the Pete Moss Benzie Invitational Large School division. Freshman Natalie Foltz was 20th in 20:19.70, with sophomore Clare Conzelmann 43rd in 21:46.50.

Levi Maier finished fourth in 17:12 to lead Chesaning to a sixth-place finish in the Medium School division at the Corunna Early Bird Invitational. Corbin Walker followed in 19:40 Caleb Walker in 19:55.

Midland took a 4-0 halftime lead to cruise to the Saginaw Valley League win. Josh Thurlow and Jon Jenkins scored two goals each, with Cole Schelb adding another goal. Jenkins also had an assist.